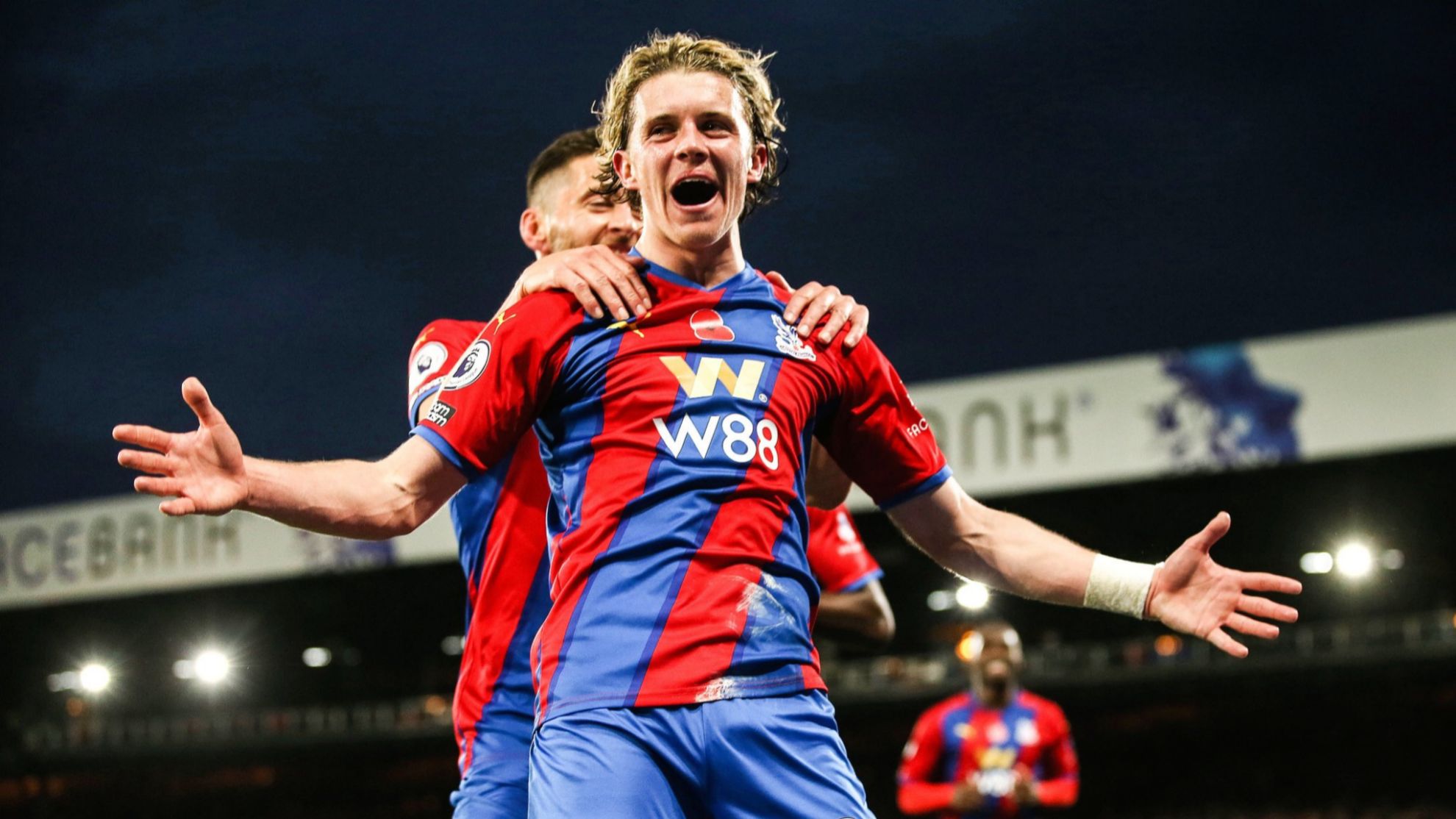 Posted at 21:56h in Premier League News by Callum Pragnell

Conor Gallagher wasn’t even born the last time Crystal Palace beat Everton at Selhurst Park, but the 21-year-old was the main reason why the Eagles finally managed to end that turgid run on Sunday afternoon when he scored two goals in a 3-1 win for the south London side.

The midfielder, who continues to dazzle spectators during a scintillating loan spell with Palace, is proving that he is worthy of a starting berth at his parent club Chelsea. This season he has scored six goals and provided three assists for his temporary employers – meaning that he has been involved in just under half of the club’s league goals in 2021-22 so far.

Gallagher stole the show against an Everton side who it has to be said were poor throughout the majority of Sunday’s encounter. Pressure continues to mount on Rafa Benitez in the Goodison Park hot seat with the Toffees now sat in 14th place and just seven points above the relegation zone.

Gallagher’s first was a well-taken first-time finish and put Palace a goal to the good just before half-time, but his second was the real showstopper, bending in a sublime curling effort in the 93rd minute to ensure the hosts took all three points. The recently-capped England international will be beaming with confidence heading into Wednesday’s fixture against Southampton, and will feel confident in his ability of building on his impressive goal involvement statistics when Ralph Hasenhuttl’s side come to visit.

He will also be eyeing up a spot in Gareth Southgate’s England squad for Qatar 2022 and there is now every chance that by this time next year he will be a regular in Chelsea’s starting line-up. Mason Mount’s rapid rise to stardom at Stamford Bridge following an eye-catching loan spell with Derby is the easiest comparison to make for Gallagher and his current situation.

Mount is now one of the first names on the teamsheet under Thomas Tuchel and is also a key player for England, turning out 26 times for the Three Lions since making his senior debut in 2019. While Gallagher and Mount are both very similar players – two forward-thinking, creative central midfielders – there is nothing to say that the two could not operate in the same system if the tactics were skewed towards making such an exciting partnership work.

Gallagher’s tenacity and desire to get stuck in and do the dirty work alongside taking care of business in the final third is one of the most impressive things about his play. There are times when his challenges are a little too firm and if there is one slight criticism which surrounds his game it is that he is too prone to being booked (he has been cautioned four times this season). However, this is something which he can easily work on in the future and serves as little genuine concern at this stage of his flourishing career.

The next step for the 21-year-old is for him to kick on and take things to the next level. With the greatest respect to Crystal Palace – and there is a lot of respect to be had for them this season under Vieira – they are not the limit for a player of Gallagher’s talent. He would have dreamt of playing for Chelsea’s first team whilst rising through the club’s academy and that will soon become his reality should the goals, assists and generally exceptional performances keep rolling from now until the end of the campaign.

The sky’s the limit for Gallagher, both at club level and internationally. He cannot become complacent and must continue to prove his case to Thomas Tuchel and Gareth Southgate, who will no doubt be keeping a close eye on his progress at Selhurst Park. Should he do just that, though, his future looks blindingly bright.