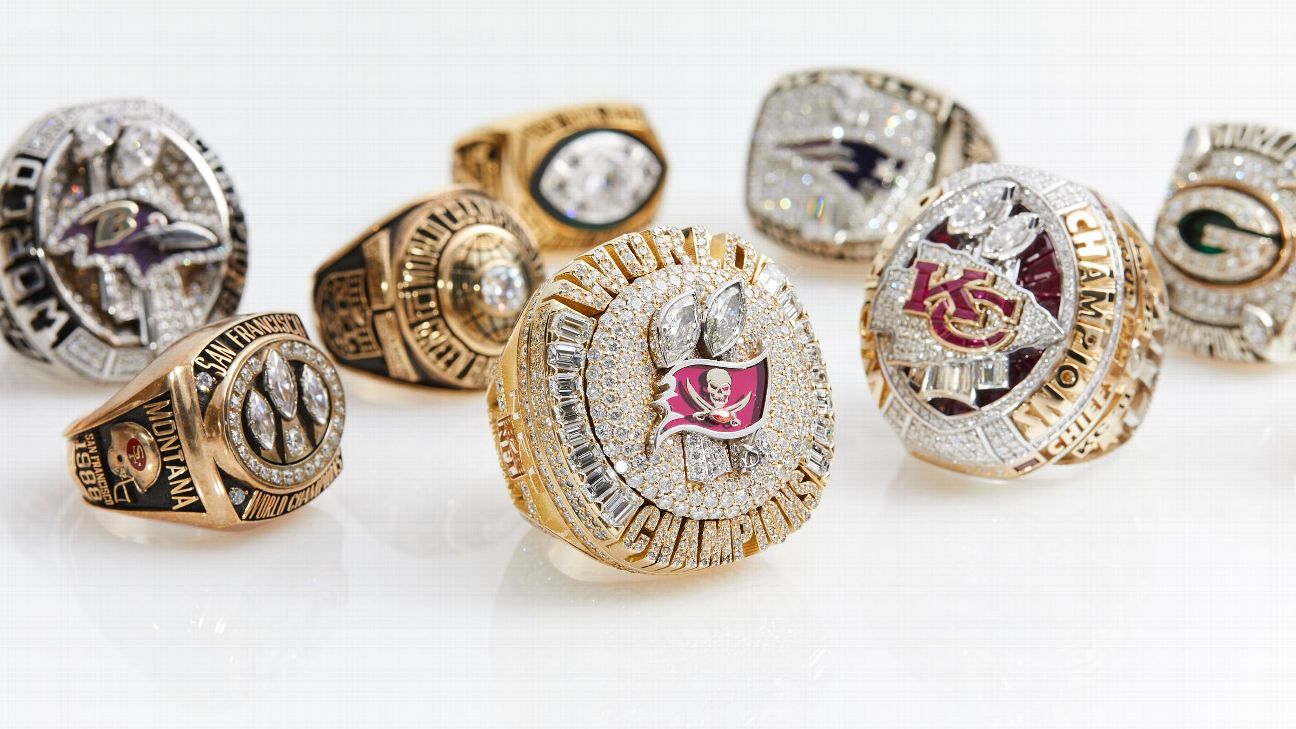 12 Jul The changing face of the Super Bowl ring

The tradition of the Super Bowl ring is almost as old as the Super Bowl itself. And as the profile of the game increased over the years, and the game made into more and more of a production, the rings too took on a flashier design. A simple comparison is the first ever ring (1967) which had only one diamond, versus the ring for Super Bowl LI in 2017 which had a staggering 283 diamonds. To see the evolution over time, check out every Super Bowl ring ever made.

Custom rings were already a thing in other American Sports, but it was first introduced in the NFL by former Green Bay Packers Head Coach, Vince Lombardi. It was 1967, and it was the first Super Bowl. The Green Bay Packers defeated the Kansas City Chiefs, and so Lombardi got his players a ring – but this wasn’t just any ring, he took the opportunity to personalise them. He had the jeweller Jostens put the NFL logo on the left side of the ring, then the crown from his family’s coat of arms on the right side along with the phrase ‘Harmony. Courage, Valor.’ with a full cut 1.0point diamond in the centre.

As it stands there are 12 teams yet to win a Super Bowl, and yet there are a number of teams who have gone on to win multiple teams. The New England Patriots, and the Pittsburgh Steelers each have six Super Bowl wins to their name. The San Francisco 49ers and the Dallas Cowboys each have five. Winning Super Bowl 55 led the legendary quarterback Tom Brady to his seventh championship, and many believe he still has gas for one more in him.

In fact, did you know that Vladimir Putin has one of Robert Kraft’s Super Bowl rings? It wasn’t a gift. He essentially just took it. In an interview back in 2013, the Patriots owner recounted: “I took out the ring and showed it to [Putin], and he put it on, and he goes, ‘I can kill someone with this ring’, I put my hand out and he put it in his pocket, and three KGB guys got around him and walked out.”. Whilst Kraft wanted his ring back, he was advised to in the best interest of US and Russian relations, for the ring to be a gift. Wild right?

So, for the teams who have more than one ring, how has each one differed? Generally, the size and shape especially if they’ve won in the last five years changes, but a major factor behind the change is mostly down to trends and keeping up with the style of existing rings.

There are also a lot of questions over who gets a ring. As standard, the league will pay for 150 rings for the winning team, this includes the 53-man roster, practice squad, coaching team, and often all the way down to front office staff.

It is also fairly commonplace for the team owners to request elaborate rings also which they pay for themselves, or the jeweller produces as a loss as the publicity gained outweighs it. Interestingly there are some rules and restrictions on the type of ring. Apparently, they have to be made of 10-karat plumb gold, and teams with a first-time win cannot wear a diamond over 150 points.

Usually, a ring ceremony for the Super Bowl winning team will take place in either June, July, or September and so we’re yet to see the design for the LA Rams after their success in February. The ring designer ‘Jason of Beverly Hills’ is working with the likes of Odell Beckham Jr, Jalen Ramsey, Von Miller, and Aaron Donald to gain their input in designing the ring – something that has never been done before.